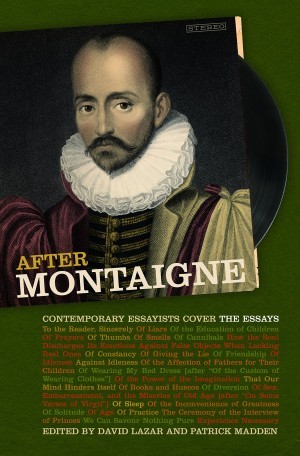 Writers of the modern essay can trace their chosen genre all the way back to Michel de Montaigne (1533–92). But save for the recent notable best seller How to Live: A Life of Montaigne by Sarah Bakewell, Montaigne is largely ignored. After Montaigne—a collection of twenty-four new personal essays intended as tribute— aims to correct this collective lapse of memory and introduce modern readers and writers to their stylistic forebear.

Though it’s been over four hundred years since he began writing his essays, Montaigne’s writing is still fresh, and his use of the form as a means of selfexploration in the world around him reads as innovative—even by modern standards. He is, simply put, the writer to whom all essayists are indebted. Each contributor has chosen one of Montaigne’s 107 essays and has written his/her own essay of the same title and on the same theme, using a quote from Montaigne’s essay as an epigraph. The overall effect is akin to a covers album, with each writer offering his or her own interpretation and stylistic verve to Montaigne’s themes in ways that both reinforce and challenge the French writer’s prose, ideas, and forms. Featuring a who’s who of contemporary essayists, After Montaigne offers a startling engagement with Montaigne and the essay form while also pointing the way to the genre’s potential new directions.

After Montaigne at University of Georgia Press